During the past summer three of us, who had met online selling our jewelry on the same site, decided to join together and advertise in Ornament Magazine using our 1000Markets.com shop URLs. No sooner had the edition been published with our ad in it, than 1000Markets.com was acquired, and with it’s demise, those urls were rendered useless.

What followed was scampering by the 1500 or so 1000Markets shop owners to find new online homes. Not only had we lost our shops, but had developed a large online community of artisans and it was sad to go our separate ways as we searched for new venues that would best suited our own work.

One thing became quickly apparent to some of us — if we had our own domains, they could not get sold out from under us and we would have more control over our destinies.

The three of us with our, then current, Ornament ad rendered useless by the sale of 1000Markets, immediately agreed that we would do another Ornament ad, this time, with our own domains. 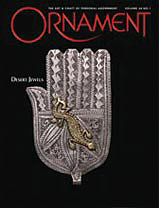 For me, it is personal pleasure to be in the current issue, the one that annually features the Philadelphia Museum of Art Craft Show, one of the top shows in the country. I had participated in that show in 1999 and consider it to be one of the greatest honors of my career.

I want to give special recognition to the extraordinary generosity of the staff at Ornament Magazine. They felt so badly that the urls in our first advertising venture with them had suddenly gone bad, rendering the ad all but useless, that out of the goodness of their hearts they not only went out of their way to get this ad in under deadline, but have promised a free repeat of our ad in the edition that follows this one. For years I have known Ornament as an outstanding and beautiful magazine, tops in its field, but now I know it is created by truly good souls.